Prior to the introduction of sewerage systems, individual cities made do as best as they could when it came to disposing of waste-water, typically by dumping waste into the streets, where it would run downhill and flow away from the city.

At least that was the plan. I am sure your imagination can fill in what that would both look and smell like. But what if you city was growing? And what would happen if there was no hill? This was exactly the case for Chicago. With the city being only a few feet higher than nearby waterways and Lake Michigan, there was no hill for runoff to run off. Sewage would just sit in the streets, creating a horrible muddy mess for most of the year. In some parts of the city, they tried laying down wooden planks to cover over the filth, but the wood quickly warped and rotted.

How bad did the streets of Chicago get? There’s a popular joke from the time that encompasses how people felt:

A man walking down the street discovers another traveller buried up to his shoulders in mud on the road. The man asks the traveller, “Do you need help?” “No, thank you,” the traveller replies, “I have a good horse under me.”

But wait, it gets even better. No drainage equals dysentery. Taking a leak could equate to typhoid fever. Chicago’s poor sanitation actually led to six years of repeated disease outbreaks that culminated in the 1854 cholera outbreak that killed six percent of the city’s entire population.

Kind of makes you thankful that we traded cholera season for construction season in modern times, now doesn’t it?

How they did it

An underground sewer faces the same problems as road drainage – water only flows downward. Since Chicago was near the same height as Lake Michigan, there was no height difference for engineers to exploit when building the sewers.

Chicago started hiring engineers to build a sewer system, and they weren’t going to let a little bit of gravity stop them. A decision was made to increase the height difference between the buildings and the water. In 1855, the city passed an ordinance to raise the height of the buildings in the downtown and along the waterline by between 1.2 and 4.2 meters (4 and 14 feet). Have you ever had to jack your car up to change a tire? Yup…you’re getting the idea.

It’s the 1850s, an era before large scale construction equipment like bulldozers, and they raised an entire city — by hand — using railroad jacks which had been developed to lift train cars off of their tracks. Even more amazing is that reports from the time said that these lifts were often accomplished without the slightest crack or damage to the buildings involved.

Starting in 1858, buildings (each weighing hundreds of tons) were raised up. Sewers were built underneath them, and the roads and sidewalks were then built up to the new level of the buildings. Stories from the time talk about hotels being lifted with guests still in their beds. Teams of dozens of men synchronized their efforts, turning hundreds of railroad jacks by hand to lift structures as large as an entire city block.

Raising the city and building the sewer system took 20 years, and for those two decades Chicago was a very exciting place to be. You could find ads in the Chicago Tribune advertising services to bring buildings up to code – pun intended. 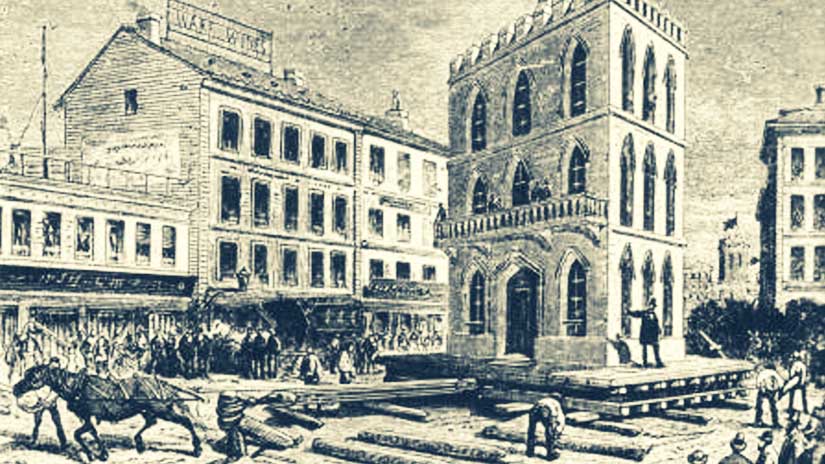 People who chose not to raise their buildings could also move them to areas not impacted by the city ordinances. Some shop owners took the opportunity to replace older wooden buildings with stone masonry buildings that were more reflective of the city’s growing wealth.

The movement of buildings was so common that they were considered to be part of everyday traffic. David Macrae, a traveller visiting Chicago in the midst of the work wrote, “Never a day passed during my stay in the city that I did not meet one or more houses shifting their quarters. One day I met nine. Going out Great Madison Street in the horse cars we had to stop twice to let houses get across.”

Do you feel better about your commute now?

Undertaking such a feat of modern ingenuity not only paved the way for better sewerage infrastructure across the country, it also led Chicago in its largest period of growth ever.