If you’re shopping for a gaming laptop, you’ll find good specs like Intel’s powerful 10th Gen six-core i7 H-series processor, a fast PCIe-based SSD, and a 120Hz refresh rate display in many of the costly, high-end models currently available. But you’ll also find all of that in Lenovo’s new IdeaPad Gaming 3, a machine that costs a bit less than $1,000 even at its most expensive configuration.

This budget-friendly laptop is able to run most modern games at a playable frame rate, and if you’re looking for something that’s useful for getting work done on, it has a decent selection of ports, a responsive Windows Precision trackpad, and a full-size backlit keyboard with satisfying key travel. The IdeaPad Gaming 3’s design doesn’t stray too far from what you might expect for a budget gaming laptop. It’s a hulk of plastic that, for the money, actually looks presentable and low-profile.

Not super great at gaming, which is an existential flaw

So, what’s the catch? Unfortunately, this model suffers in the graphics department, perhaps the most important aspect of a laptop designed for gaming. I reviewed the top-end $989 configuration that features Nvidia’s GeForce GTX 1650 4GB graphics. This is a particularly disappointing oversight, partly because it’s the bottleneck of this experience when it comes to gaming, and also because there are other gaming laptops at this price point that use the superior GTX 1660 Ti or RTX 2060 from Nvidia or the RX 5600M from AMD. It’s possible to buy a $919 configuration built with the slightly better GTX 1650 Ti, though not without dropping down to the slightly worse Intel Core i5 10300H processor. I’d probably go for that model if I was intent on getting this laptop, though. 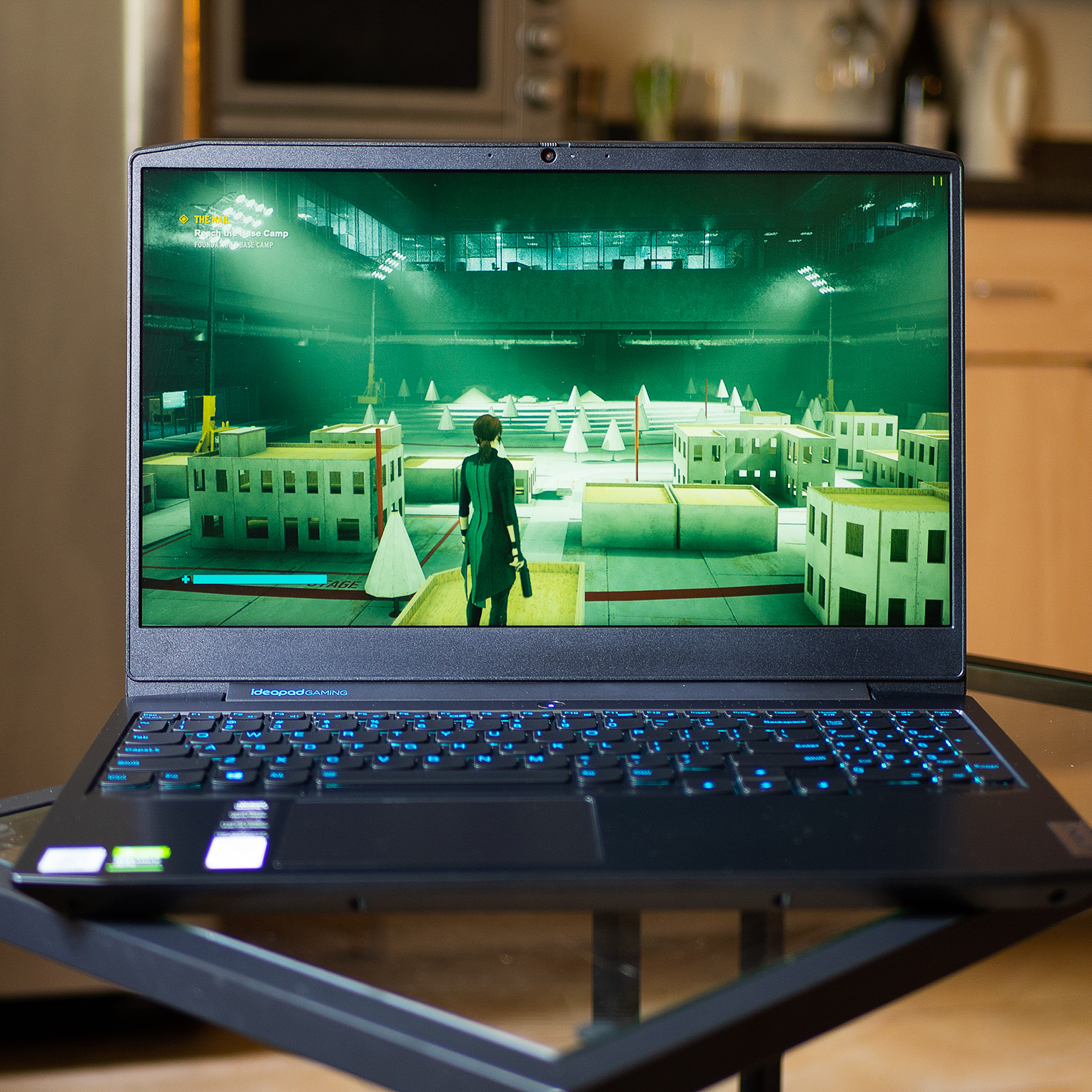 Despite this, it can run everything I currently want to play at a playable frame rate, so long as I’m willing to turn down the eye candy to maintain 60fps at 1080p. This includes Persona 4 Golden, Risk of Rain 2, more demanding games like Control, Hunt: Showdown, and the particle effect-laden Tetris Effect.

If you just want to be able to play Fortnite, or some games in your Steam backlog, but don’t care about running each title at its maximum settings, you won’t be disappointed here. But each time I ran into some slowdown in a game, it served as a moment to reflect on Lenovo’s strange decision to pair a very capable processor and fast PCIe-based storage with this weak GPU. What’s more, getting to enjoy the glory of this laptop’s 120Hz refresh rate display was something I rarely got to do — and only after I made big sacrifices to visual features that I usually enjoy cranking to the max, like shadows, anti-aliasing, and post-processing. Plus, I’m not so confident about how it’ll hold up for games coming later this year, like Cyberpunk 2077 and PC versions of games made for the PS5 and Xbox Series X consoles launching later in 2020.

The IdeaPad Gaming 3 didn’t raise much of a stutter while running my loadout of work applications, which includes running Spotify, Affinity Photo, Slack, and anywhere from 10-20 Google Chrome tabs in perpetuity. In terms of performance, the laptop started to chug when I pushed its 8GB of RAM to the limits with too many Chrome tabs and Affinity Photo projects. Lenovo confirmed to me that both the RAM and M.2 SSD storage can be upgraded by unscrewing the bottom shell of the laptop, so at least you can remedy this issue yourself if you choose.

The RAM and M.2 storage are user-upgradeable

You’ll want to dig into Lenovo’s included Vantage software to get the most out of this machine. It’s where you can toggle an option to automatically switch to performance mode when a game boots up (it puzzlingly is off by default, meaning gaming performance isn’t great without it switched on). Another option worth toggling is the Rapid Charge, which lets the battery charge to 80 percent in just an hour. Also, this is where you can update this laptop’s BIOS and other hardware that the Windows Update tool doesn’t target. Unfortunately, it’s pretty easy to mistake this app for bloatware, since it constantly hounds you about McAfee virus protection unless you either sign up or delete it from the hard drive.

No matter what activity you’re doing, you’ll be looking at the 15.6-inch FHD IPS display. The one I tested has a 120Hz refresh rate, though the less expensive options have a 60Hz display. Neither are the brightest of displays, topping out at 250 nits, but the bezels surrounding it are minimal, and the colors and viewing angles look sharp. There’s also a 720p 1-megapixel webcam at the top of the screen, complete with a webcam cover if you want some privacy.

The relatively small 45Wh battery was able to last around four hours with my batch of work apps, though as expected, it didn’t hold up for too long while I played games. After playing Control and Tetris Effect for about an hour, it automatically switched to battery-saver mode at the 30-percent level, which renders most games unplayable. When this laptop is plugged in with the included 135W charger, it keeps cool and relatively quiet. Also, while connected to power, you can hit the Fn + Q keys to flip between the performance profiles at any time, letting you manually amp up the graphics card and processor performance.

It’s easy to dismiss the IdeaPad Gaming 3’s faults when you consider its price, but the reality is Lenovo could have done a better job here. It’s great that it includes a powerful processor and high refresh rate display, but without a better graphics card, those benefits go to waste. Just being able to run games isn’t quite enough to recommend this as the gaming laptop to buy — even if it’s aimed at people on a strict budget. I’d either hold out for a deal on a more expensive option or consider Dell’s new $880 G5 15 SE, which features AMD’s comparable 7nm Ryzen 5 4600H processor and superior RX 5600M graphic chip.

Photography by Cameron Faulkner / The Verge